(This is the SECOND installment in a blog series on the Experimental Television Center exploring the community and institutional culture of experimental media education in an under-examined area of the first decade of video’s history. The series investigates issues of educational structure, access, technological and media literacy, collaboration, discourse, and public outreach at the nexus of higher education, public humanities, and the emergent media center. )

While cassette tapes from the conference in the collection of the Experimental Television Center are currently in the process of being transcribed, the program for The Seminar in Teaching Making demonstrates a star-studded genealogy of process and thinking from avant-garde and structural film to emergent video in the formation of media and maker responsive teaching. (1)

Excerpts from Stan Brakhage’s paper on “Some Doubts on the Venture” attempts to situate the university within the greater social and metaphysical demands of arts versus craft. It appears to forebode a crisis of universities producing graduates for which there are little viable economic outlets for cultural production, with educational structures creating a glut of teachers and insular, formulaic curricula for disserviced students.

A response from Hollis Frampton in a later Q&A session revisits the craft vs. artistry debate, using the metaphor of shooting cinema verité for a recovery of artistry beyond the conditions of educational and cultural isolation, and perhaps offering the possibility for flourishing health in through working modes of exchange.

Was Frampton referring to community work, or in institutionalized discursive exchanges such as the Seminar in Teaching Making? Perhaps the program for the Seminar in Teaching Making, with its collaborative model for convening university faculty in experimental film and emergent video, independent makers, and staff from not-for-profit community media centers—including a program of public humanities discussion and screenings—offers another place for us to start with from the community-minded history of early video in Upstate New York.

Enjoy the excerpts below for yourself: 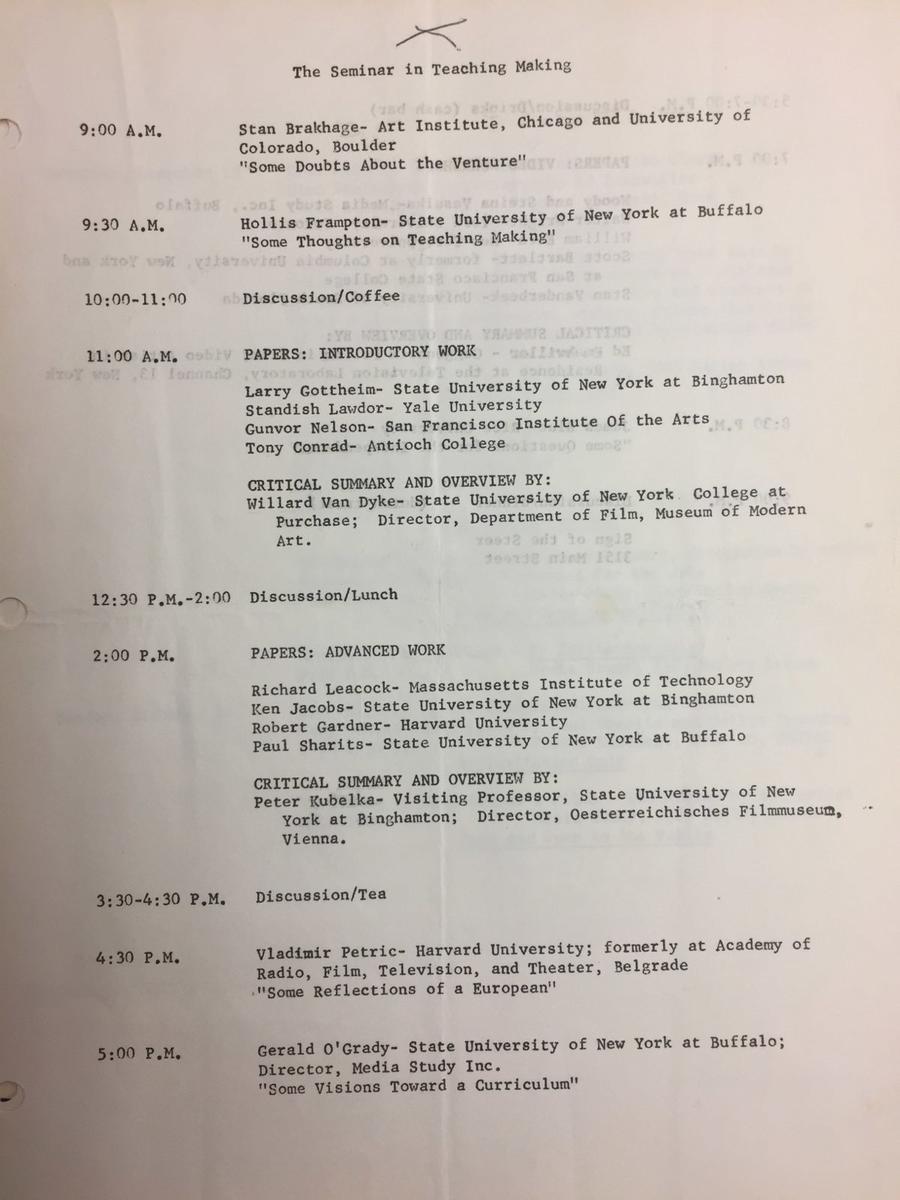 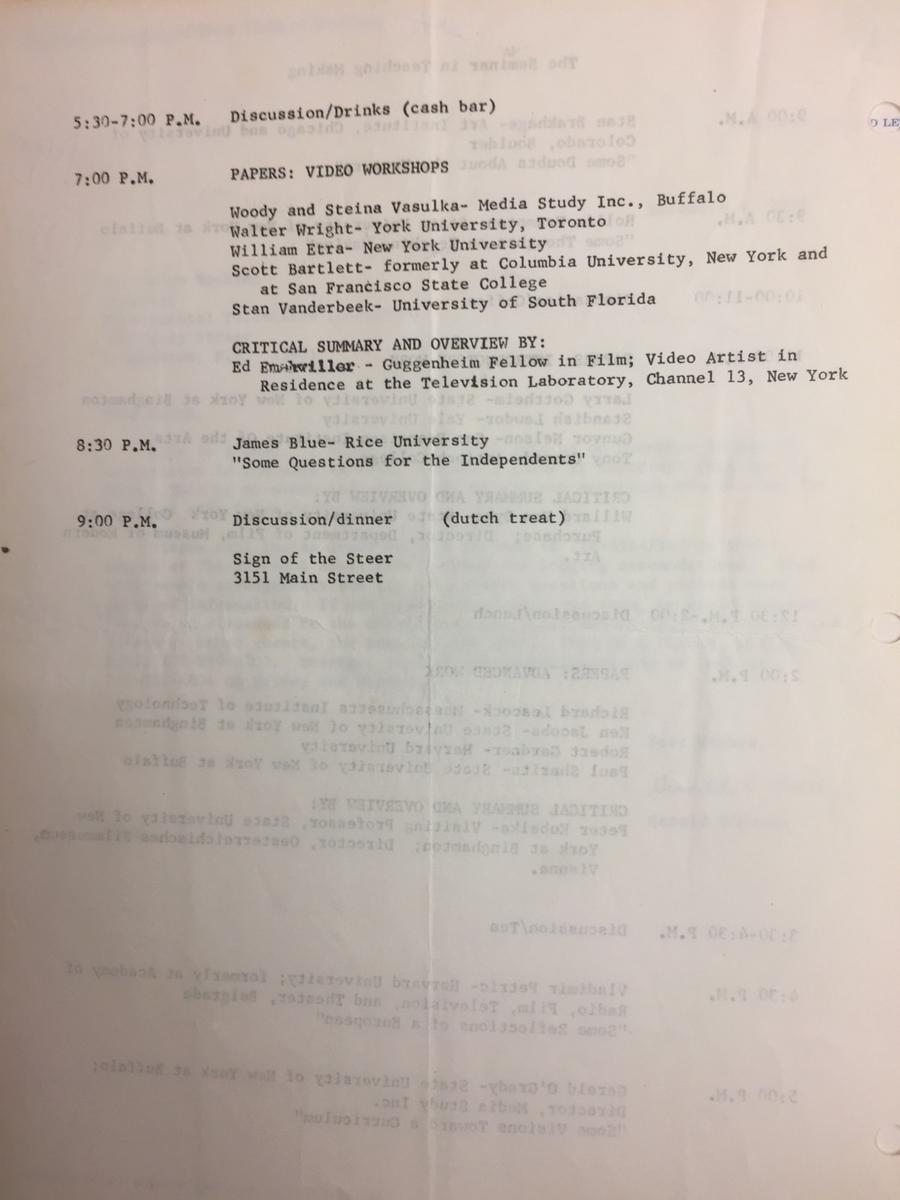 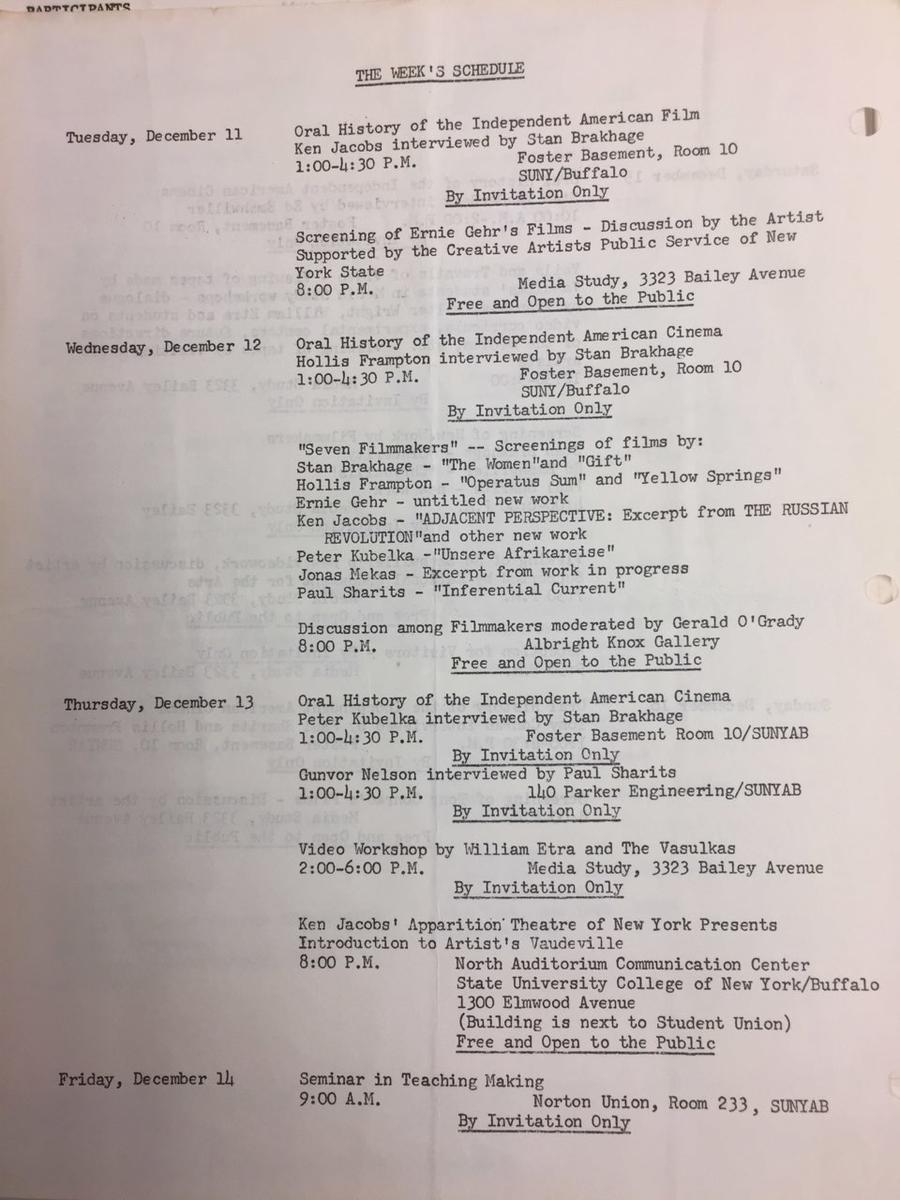 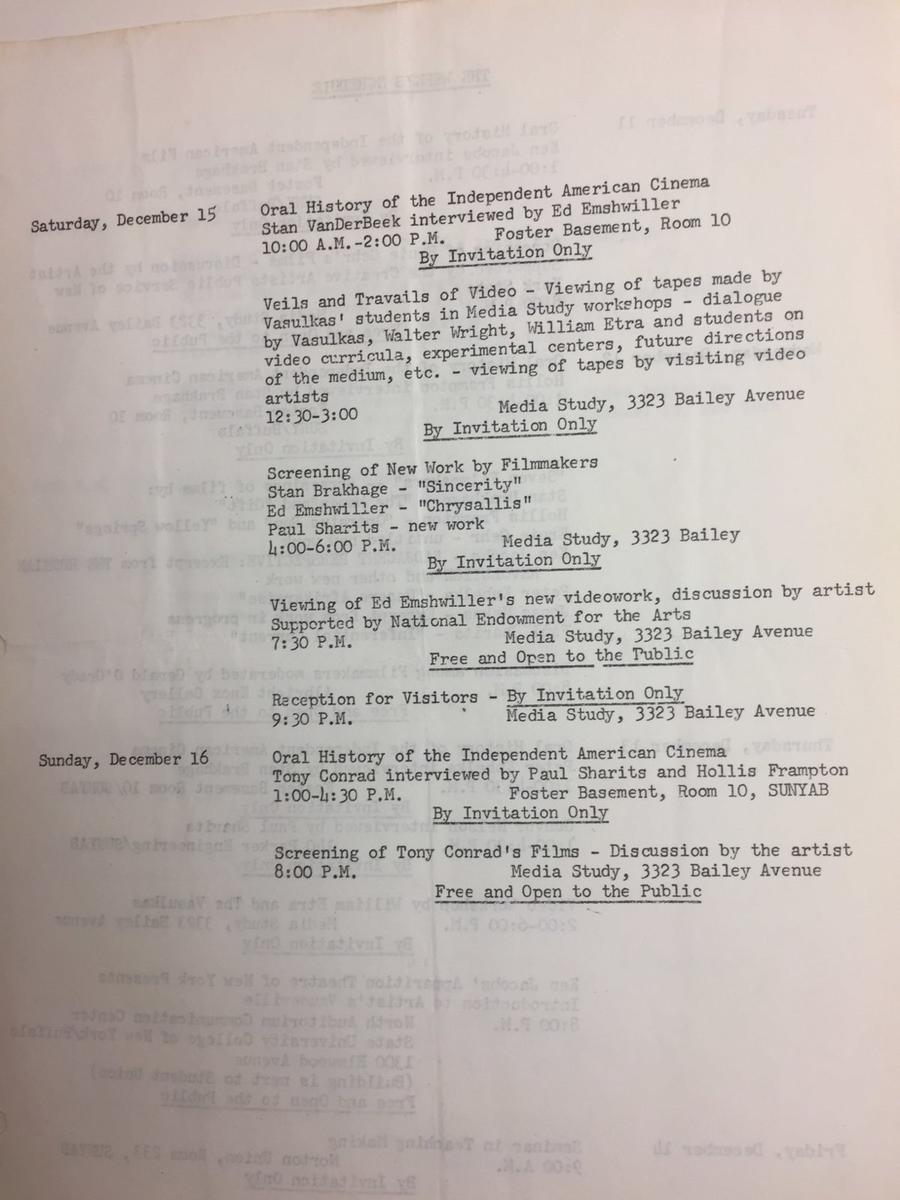 Stan Brakhage – Art Institute, Chicago and University of Colorado, Boulder
“Some Doubts About the Venture”

“What distinguishes, anyway, the art [from craft], as I understand it, is a state of trance.  I don’t like to use that word because it has mystical overtones. Actually, it’s a very practical matter for a working artist. Mostly what it takes to bring on this trance as I understand it is a lot of time, a lot of leisure and being open to it, and being able to endure and survive it. Having the courage to permit it and to go in to it in fear of losing one’s mind, and being able to survive it. There’s no school I know that teaches the technique of this and in fact if one did with most students there would be a risk I do truly believe of causing some people to go over the edge. That is, there would be a health risk involved in such a class not more severe than the health risk there is in a chemical class but society is used to the kind of risks that occur in chemistry classes, and they do not even understand for the most part the mental state, emotional, full body state that’s essential for making something, whatever you want to call it that the maker has to feel comes from somewhere else in him or through him or her.

“This is the center of the matter of creativity. And the colleges not only don’t recognize it generally, even though they have in their libraries,  whole histories of poets who have spoken of such things, they do not recognize it, and if they did recognize it there would be very few people who would know how to teach it, and if they could  teach it, it would be dangerous to the institute and to the students mentally, and most students would at least discover very quickly that it wasn’t artists that they ever wanted to be in the first place anyway. That would probably be the only benefit of it.

“The other situation is we have an incredible fraud of inpouring of students every year most of whom do wish to be artists—they think—and most of whom expect and are given to expect as an assumption that going to the school will make it possible for them to be artists. And ninety-nine and forty-four one hundrethds ivory percent pure almost all of whom emerge from that college bitterly to become art teachers you will soon have the situation that half the goddam population is teaching the other half art. And when that arrives one can see clearly that very shortly the whole thing will be over.

“That’s what I’m looking forward to because it is a fraud as it now stands. And it’s a fraud that is engaging men who have managed this trance, and who can make art so thoroughly and as the only means left over to them since the tax reform bill whereby they can make a living at all tangentially to something they know something about. Otherwise we could all go become tap-dancing gas station attendants in Omaha or somewhere and make a Decent Honest Living.

“As it is we are engaged in fraud and that is for an artist blasphemy because the trance is to that extent religious, and that’s the means that’s left open to us to make a living. And I’m sick of it. Obviously.”

“(…) Art is perhaps traditionally one of the few ways that we might preserve what little is left of sight and, maybe—here’s the mad hope—gain a little of it back for an otherwise almost totally blind society. But you have the people that can make that art at this moment so tied up talking, which they’re either good at or not. (2)

“(…) I think the discussion of film craft and actually getting an image on the screen can be as complicated as painting a portrait in any traditional way, and that the absolute mastery of that craft is something much more complicated than loading and exposing film. I understand the difference between the blend of that and artistry, and I understand art which comes out of craft, or an understanding of craft, or a kind of ability that an artist has. But it’s through craft or an understanding of craft that I think the best artistry in film can be demonstrated. So I want to say that I like the idea of what Ken [Jacobs?] is saying which is coming out of the experience of an exchange. And I like the idea of shooting verite as seeing artistry as coming out of the exchange.

Collaboration, Connected Learning, Higher Education
This site is part of the HASTAC network on Humanities Commons. Explore other sites on this network or register to build your own.
Terms of ServicePrivacy PolicyGuidelines for Participation