In this blog, I describe how my class co-authored a set of community guidelines in order to create a supportive environment for discussing issues of race, class, gender, and sexuality.

This past semester, I had the deep pleasure of teaching an English course on “The Arts of Dissent” at Queens College, where I shared some of my absolute favorite works of literature — Lorraine Hansberry’s A Raisin in the Sun, Chris Abani’s GraceLand, and Claudia Rankine’s Citizen — with twenty-eight incredibly bright students.

Since I began teaching at Queens, I have thought a lot about what it means to be a white teacher who teaches texts primarily by black authors to a diverse class of students. I want to create a classroom environment in which every student feels encouraged to share their reactions to our readings. I also hope to increase students’ awareness of their-subject positioning within intersecting axes of power, just as I am continually seeking to better understand my own positioning in this matrix. There are many times and places where “calling out” is not only appropriate, but necessary; however, as an educator, my primary means of involving students in critical reflections on sexism, racism, homophobia, and class privilege is always through calling in. I have been fortunate to have many students who are already deeply involved in these conversations and struggles for social justice and I do my best to help them understand the historical and institutional nature of these issues. For the rest, I call students into these conversations by assigning powerful readings that convey the urgency of addressing structural inequality.

This past semester, as we completed our discussions of A Raisin in the Sun and were poised to begin Citizen, it felt urgent to deliberately address with my students the ways gender, race, class, and sexuality shape classroom conversations, often in unacknowledged ways. For those who haven’t read it, Claudia Rankine’s Citizen: An American Lyric, is a gorgeous multimodal assemblage — at once seething and breathtaking — that tracks the pernicious effects of microaggressions across multiple scales. Ranging in breadth from Turner’s painting The Slave Ship (1840) to the Black Lives Matter movement, Citizen should be required reading not only for every student, but for everyone.

As our discussions of the text approached, I was thinking about the ways class conversations can exclude certain voices and elicit a kind of tokenism, in which the perspective of one student, especially from a minority background, is wrongfully understood to represent the perspective of an entire social group. I was worried that our class conversations, especially in terms of who gets to speak the most, would reproduce the very hierarchies that Rankine’s text works to subvert. I was thinking of students whose fears of saying the wrong thing might lead them to disengage from these important conversations entirely (and thinking about the ways disengagement is often a stance only available to the relatively privileged).

Previously, I had tried to address these issues using my authority as a teacher. I would make sure that students whose voices have historically been excluded from higher education were called on. If one student’s voice was taking up too much of class, at the expense of others, I found ways to hear from everybody. If a student said something that might be construed as racist, sexist, or homophobic, I did my best to show the class the implications of a comment, without making the student feel bad. In short, I tried to cultivate an environment in which it was understood that our backgrounds shape the ways we think, and where students felt empowered to learn more about the difficult topics we discussed.

Rather than internally debate how these power dynamics shape our classrooms, this past semester I decided to involve the students in these discussions by having them create a set of community guidelines before our discussions of Citizen. I have, for a long time, been interested in trying a version of the “class constitution” exercise championed by Cathy N. Davidson and practiced by educators like Kalle Westerling and many others. Like these educators, I see the potential of this exercise to create a classroom that students feel they have a stake in, not as if the rules are being forcefully imposed upon them. This seems like a central component of a college education that doesn’t reinforce K-12 lessons of punishing those who disobey the rules, but instead teaches students to work together in order to determine the rules that the class will collectively agree to follow.

I introduced this activity by explaining that we would be analyzing the text as a work of literature (even as we interrogated what this term means and how it is defined) and discussing the issues of racism and microaggressions raised by the text. Specifically, I told them that the text has a unique ability to challenge readers of all different races. It confronts us with the realities of white supremacy, especially, but not only, as expressed through recent police brutality. I told them that I wanted us, as a class, to collectively establish a set of guidelines for discussing this text so that everyone feels comfortable and not antagonized, nervous, or thinking that their voice doesn’t matter in this class, because everyone’s does. While I didn’t read these points from a piece of paper, I had written them out for myself the night before so that I had a sense of what I wanted to say in class to introduce the community guidelines activity.

In preparation for this activity, I compiled a list of guidelines that I thought would make for generative class discussion in a Google Doc. Rather than asking students to produce these guidelines from scratch, my examples modeled the kinds of statements that might make for inclusive dialogue. I printed these out and projected them on our Smart Board. We read through them as a class several times and students asked questions about them. 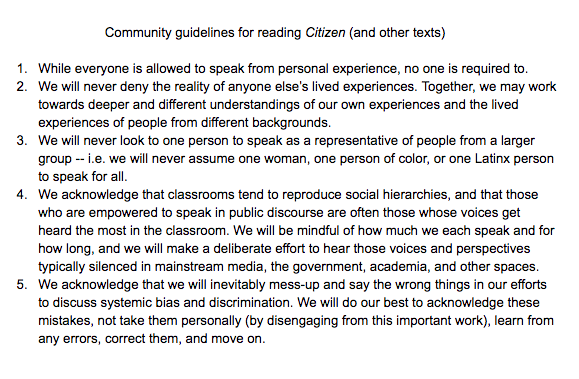 Next, they took a few minutes to read them on their own and come up with things they wanted to change, remove, add, or reword. They then turned to the person sitting next to them and discussed the edits they wanted to propose. Afterwards, we went around the room and each pair shared their proposed edits, which I added to the document. Every group was called on to speak, even if their contribution was stating that they agreed with the additions a previous group had made. Students were enthusiastic about these changes, and were continually building off what others had said. In fact, it was one of the liveliest conversations we had as a class.

Once we had a revised document with everyone’s suggestions, we edited the guidelines, combining ideas that were similar and rewording some for clarity. Because I wanted students to feel comfortable with the guidelines — to feel as if they accurately represented their interests, and were principles they were willing to abide by — I asked them to think about the guidelines over the next few days, and announced that we would ratify them at the beginning of the following class. The following class, students shared any proposed amendments, after which we officially ratified our community guidelines. Here is what we came up with: 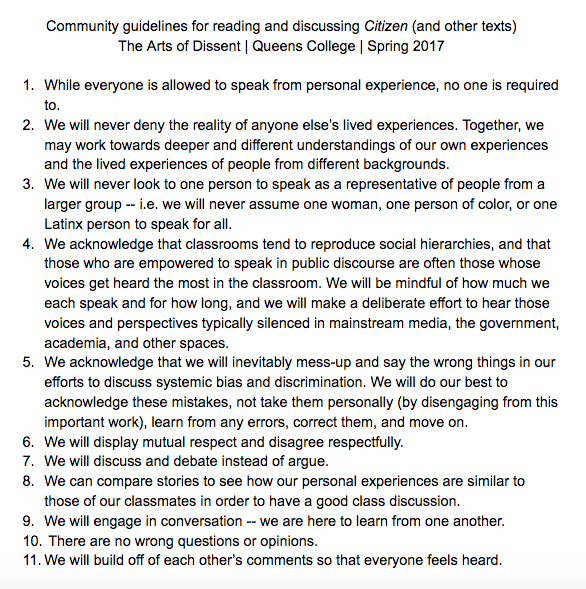 What followed was a whirlwind of passionate student-led discussions about the text — some of the brightest highlights in my career as an educator.

The idea of co-authoring these community guidelines emerged from the texts we were reading about bias, discrimination, oppression, and other modes of silencing and depriving specific groups of people. And the experience of working on these guidelines was itself a transformative lesson. I very much understand the benefits of establishing some sort of class constitution at the beginning of the semester, and in some ways I wish we had done this activity sooner. But I also want to advocate for the deliberate establishment of guidelines at any point in a course, and I wonder if the students would have been comfortable enough with each other at the inception to produce such a document.

We live in a highly stratified society, and the classroom is in no way immune to the distribution of power along embodied axes. However, as educators, we have a degree of control over our learning environments that allow us to experiment with other ways of being together. This community guidelines exercise is just one among many ways that we can involve students in conversations about how power is distributed in society, and work with them to establish more equitable learning environments.

Original artwork by Julie Abbot, a student in “The Arts of Dissent.”

Collaboration, Higher Education, Pedagogy
This site is part of the HASTAC network on Humanities Commons. Explore other sites on this network or register to build your own.
Terms of ServicePrivacy PolicyGuidelines for Participation